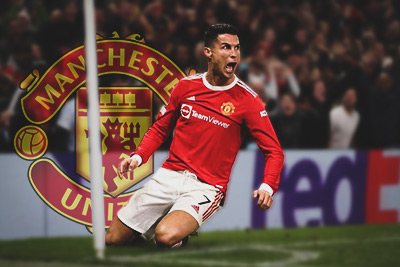 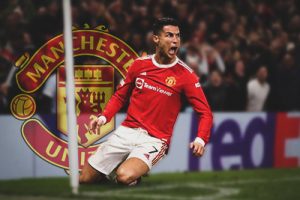 Cristiano Ronaldo slid down on his knees as the final whistle of the match between Manchester United and Atalanta came to an end. Manchester United won the contest with a final score of 3 to 2 vs. Atalanta. The Portugal star came up huge at the end of this game as he led his team to a huge comeback win in final minutes of play.

The greatest goal – scorer in the Champion’s League competition’s history, Ronaldo, flew to knock in a header in an 81st – minute winner as Manchester United erased a 2 – goal halftime deficit to beat Atalanta 3 to 2 in a wild and rowdy match at Old Trafford Stadium located in Greater Manchester, England on Wednesday, October 20th, 2021.

Cristiano’s record – extending 138th score in the Champions League, came just 3 – weeks following his goal in the 5thminute of stoppage time in order to snatch a win over Villarreal in the 2nd round of games. On this occasion, the tally came earlier in the contest, and it was a trademark header with unbelievable hang – time as well as absolute accuracy after meeting a cross from his Manchester United teammate, Luke Shaw, that Shaw had struck hard in from the deep left.

Manchester United keeps moving along the hard way during this season’s competition. Including a very surprising loss to Young Boys in their first game following a first – half red card issued to Aaron Wan – Bissaka. Then a come – from – behind 2 to 1 victory versus Villarreal after being largely outplayed for long parts at Old Trafford.

Now this comeback win vs. Atalanta, which moved Manchester United into the first place spot in Group F as they are currently 2 – points above the Italian side as well as Villarreal. Ronaldo was playing his historic 300th match for Manchester United on Wednesday.

Atalanta was already playing without key defenders such as Rafael Tolói (who is Atalanta’s captain), Berat Djimsiti, Robin Gosens, and Hans Hateboer during this match – up, and Manchester United easily took advantage of Atalanta’s make – shift backline throughout the second half of this game. Look for Cristiano Ronaldo to stay hot as Manchester United continues to play again in the Champion’s League moving forward

“That’s just what he does,” the manager of Manchester United, Ole Gunnar Solskjaer, expressed.

“His leap, his timing – it was the perfect header,” the Manchester United captain, Harry Maguire, emotionally explained. “He has come up with a massive goal again in the Champions League.”

The Blackjack Basic Strategy Card – Why You Need It and How To Use it
US Gambling Generates $5 Billion in July
Blue Lake Casino and Hotel workers to unionize under the aegis of Unite Here
BetMGM signs actress Vanessa Hudgens as new brand ambassador
Washington: Maverick Gaming sells Macau Casino in Lakewood for $22M