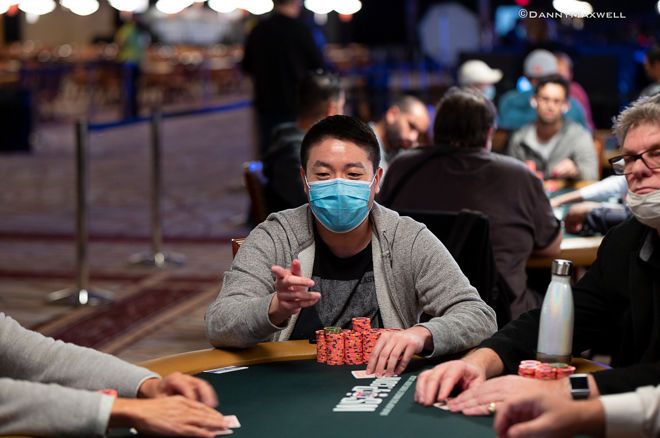 Keep reading to discover what went down in the events that are currently in play.

Follow all the live-action as it happens from the 2021 World Series of Poker in Las Vegas!

Stephen Song bagged the Millionaire Maker Day 1b chip lead with 431,000. Song already has one bracelet and will be looking for number two in the next couple of days.

The penultimate day of Event #18: $2,500 Mixed Triple Draw Lowball began with 104 players remaining, all looking to bag up a stack at the end of the night and keep their hope alive for that coveted WSOP gold bracelet and the $134,390 in cash that comes along with it. After ten 60-minute levels of play, the action was down to a dozen hopefuls still in contention for the title, with Jason Daly (1,595,000) leading the pack.

Second in chips and attempting to add a fourth WSOP gold bracelet to his collection is Brian Yoon (1,080,000). He is no stranger to running deep in WSOP events and will look to use his experience as he works his way towards a victory.

A few notable bracelet winners that made the money, but did not make it to the final day included Johannes Becker (13th place), Carol Fuchs (15th place), and Nicholas Seiken (19th place).

Please join us on Sunday here at PokerNews for live updates throughout the tournament or live here at the Rio in the Amazon room at 2:00 p.m. local time where we will play down to an eventual winner!

Five hands of Badugi remain to be played and the button on both tables will be in the three-seat. The limits will be 25,000/50,000 upon restart and the seat assignments for the final two tables are as follows.

Find out if Yoon can secure WSOP bracelet #4

A total of 46 runners entered on Day 1, though registration will remain open until the beginning of Day 2. Other players who made it to the end of Day 1 include James Chen, David “ODB” Baker, Jack McClelland, and Ari Engel, who is fresh off of winning Event #9: $10,000 Omaha Hi-Lo 8 or Better Championship.

There were a number of big names in the field who didn’t manage to make Day 2, including Daniel Negreanu, Shaun Deeb and Scott Seiver. Other players in the field included Brandon Shack-Harris, Steven Albini, Chris Vitch, and Ken Aldridge.

Day 2 will commence on Oct. 10 at 2 p.m. local time and levels will increase to 90 minutes in duration. Day 2 will include a 60-minute dinner break after Level 14 and will break after seven levels of play.

Read up on Day 1 and follow to see who will win the $10,000 Seven Card Stud Championship here