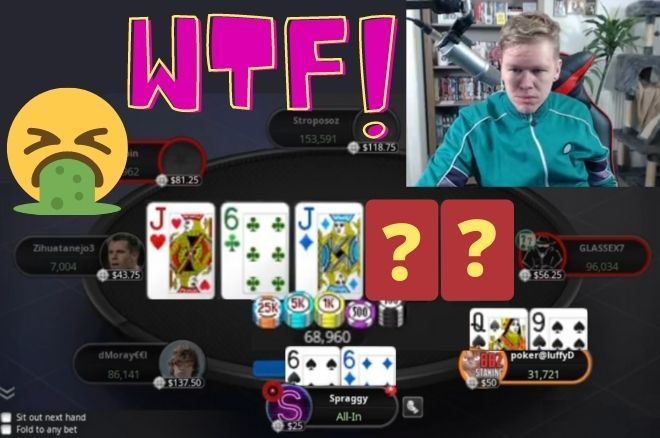 Many people share the common misconception that sponsored poker pros run hotter than the sun. Sure, there are times they combine playing well with running hot, but they are still subject to the same horrible bad beats as the rest of us mere mortals. Team PokerStars’ Ben “Spraggy” Spragg has evidence of this.

Spragg found himself on the bubble of the $109 Daily Turbo Cooldown PKO when Guntis “[email protected]” Aleskins opened from the button. Spragg responded by three-betting almost all-in to 30,400 with

The popular British grinder slung a couple of throwables at his opponent before declaring, “I’m don’t even know if I am meant to shove here on the bubble. I was kind of counting that someone would bust before me,” before hitting the call button, and discovering Aleskins held

It was one of poker’s many coinflip scenarios, although Spragg held a narrow 51.1% to 48.9% advantage. Spragg looked to have doubled his stack when the flop fell

, improving his equity to 98.1%; he even gave out a little laugh at this point and taunted “beat that!”

river gifted Aleskins four-of-a-kind jacks with a queen-kicker, and the 68,960 pot!

Spragg crashed out in 11th place with 111 places paid, so he did make it into the money, although he would likely have finished nearer the 31st place Aleksins enjoyed had Lady Luck not been such a cruel mistress.

The Team PokerStars Pro has seen almost everything poker can throw at someone over his 13 career, including dishing out some of his own beats, but losing to a 1.9% chance must sting a little.

However, Spragg took it in his stride, perhaps because he is still on cloud nine after winning his second WCOOP title, this one worth $67,968, earlier this month.